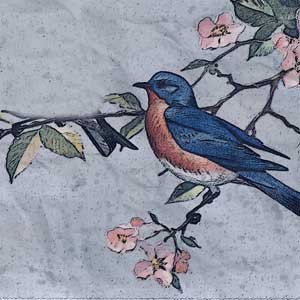 One day, a young bluebird landed on a branch and saw its first quetzal. The quetzal had beautiful feathers, long and flowing on the ground like royalty. Its body had a much more vibrant red than the bluebird’s rusty orange chest.

The bluebird flew back to its flock, excited to tell the others what he had seen. Others in the flock listened, yet replied, “Oh, yes, those are quetzals. You will see them once in a while.”

The bluebird set out on a quest to look like the quetzal. He found red coloring from flowers and smothered it on his body to have more of the cardinal color on his front, but this only wore off and made a mess in the rain. Worse, he found fallen quetzal tail feathers and attempted to attach them to his own tail, so they would flow behind him like the quetzal, like royalty. He found some sticky nectar from a tree to attach them, but they also fell off, one by one. And when they fell, they pulled off the bluebird’s beautiful powder blue feathers, too—leaving empty patches.

Finally, the bluebird could no longer stand it. Why could he not look like the quetzal? He flew away as far he could until the sun started to go down, and he got tired. He landed on the ground, stuck his beak in the dirt and started to cry.

Then he heard a voice behind him ask, “Why are you crying, little bluebird?”

The young bluebird was forced to bring up his head. He turned around—and there, standing behind him, was a quetzal.

This only made the bluebird feel worse—but there was no point in denying it now. “Because,” he sobbed. “I’ll never be as beautiful as you. I want to be a quetzal and be royalty…like you look.”

The quetzal tilted its head and took small steps toward the bluebird. With every step, his tail trailed the ground and made dragging sounds. “You think I look like royalty—yet I drag my tail on the ground everywhere I go. How is that royal? I love the earth, yet I cannot hop across it as you can. As well, my bright color just makes my enemies—predators and humans—be able to see me better. I cannot live my life, little bluebird. I wish I was you!”

At first, the little bluebird did not understand. He looked at the quetzal’s tail and saw that it did drag the ground. The quetzal looked tired, like he had been flying all day. Was that because of the predators he spoke of?

He talked to the quetzal a long time and found the quetzal to be kind and wise. That evening, the little bluebird flew back to his flock.  When the bluebird returned, he was no longer bothered by his appearance—not even his patchy behind. He knew his tail feathers would grow back again and would be the same blue color they were before, a beautiful subtle blue.

He told his flock of the quetzal, and they were so happy the little bluebird was home and safe. And from that day on, bluebirds were the happiest birds in the forest.

MORAL: Only you will observe flaws in yourself that do not even exist. 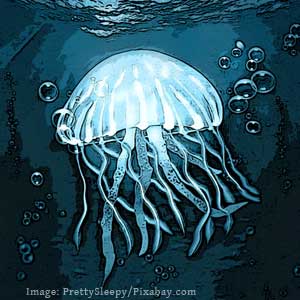 One fine blue day in the ocean, Jellyfish was floating through the water, propelling himself with his tentacles. He did not have a fancy backbone or fins like the fishes in the sea, and felt rather limited by his own form of movement.

Nevertheless, he drifted around quite effectively, working with the currents to always get where he was going.

When twilight fell, he happened to float by Sponge—the longest-living creature in the ocean. Sponge was more than 1,000 years old and always oozed out his wisdom, while other creatures took in his advice.

And as usual, Sponge was secreting sage words to the fish that hovered around him, stopping and using their backbone to sway gently back and forth and stay in one place.

Sponge declared, “Character is everything! Humans sometimes call it having a backbone.” He gurgled ruefully. “Of course, some of us have character without a backbone.” And all the fish bubbled in laughter.

Jellyfish was stunned—he wanted a “character” type of backbone if he couldn’t have a real backbone himself. He knew exactly who to ask about character: the only writer in the ocean, which was Octopus (he was the only one with ink). He was writing about characters all the time.

Once Jellyfish asked Octopus how he could have backbone—or character—Octopus explained the concept with a smile and gestured with his eight tentacles.

“Oh yes, oh yes….It’s true,” he said, in his quick speech that flipped through the waves as quickly as his arms. “You can have character in this way. Sponge was talking about having character in life. How can you get it, you ask? Why is it everything?”

Jellyfish did not have eyes, but he felt himself blink, for Octopus knew his questions before he asked them.

Octopus continued, “Finding your character is not a destination, like reaching the other end of the ocean. You have character now—you’re a good jellyfish. You will become an even better jellyfish as you swim through even more waves, and by the end of your life, you will have even more.”

Jellyfish did an internal blink again. He thought he understood what Octopus meant. It was enough to know that even in his current form, and even though he had no backbone, he already had formed character.

MORAL: Character is what you become…and for good creatures, what you are while becoming it.

🎃🦃🎄Hooray! It's Hallowthanksmas, a time w

😂And I'm not sure if I'm being facetious, truth

😂This is a bit #ridiculous but.... Maybe none

🐦One day, a young bluebird landed on a branch a

Images credited to original artist or photographer; unmarked images are by the author, unless otherwise noted.